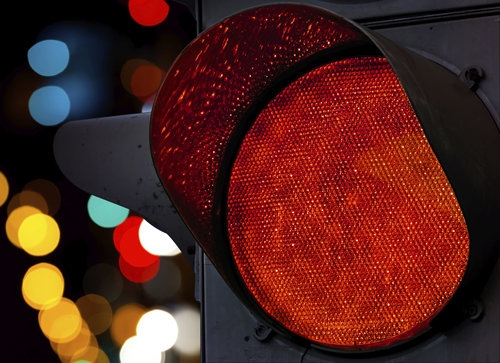 Very few people like to have to say “please listen: my project is a dog’s dinner” and, in many organizations, the culture of project management discourages raising such red flags. Gretchen Gavett recently published an article, “The hidden factor of a failing project” on the HBR blog that touched on this topic.

In my experience, it’s more a question of how a leader deals with the red flag once it raised that determines whether people raise them. Several years ago one client company of mine held a Monday morning review of all its projects; there were several hundred of them. They used the traffic light system to flag progress. Green indicated a project was on target, yellow indicated problems, and red showed the project was way off schedule. In each meeting they compiled a list of the “Top 5 Red Lights”. Later that day, the project managers responsible for those red-lighted projects would receive a tough call from the CEO. After a few months, few projects were red – people just reported yellows in the hope of a quiet life!

When I was with ABB, senior management took a more supportive role when people reported delays. On one of my projects, I was behind schedule because of the difficulty of getting enough people to staff the project. One evening Hans, a senior vice president, asked me about the project’s progress. Based on my previous dealings with him, I knew he was genuinely supportive and appreciated people being open about difficulties. So I told him about our slow progress, outlined the reasons and also suggested where we could get the people who could get us back on track, at a slight hit to the budget. That evening he started working the phones to get the people the project needed. By lunchtime the next day we were fully staffed.

These two examples illustrate two very different ways of dealing with projects that have problems. Each stems from a different view of the leader’s role and how to achieve performance in projects. The former has a problem-oriented focus, the latter a solution-oriented. The latter promotes openness and transparency. It helps leaders to learn more quickly about any problems coming onto the radar. It also promotes higher levels of initiative among staff, since people are encouraged to come up with solutions to problems rather than apportion blame.

One possibility, if your own project shows a red light, is to engage with someone more senior to get their support for a solution. Here it’s important to prepare a suggestion and not just say “Houston, we have a problem.” That way you maintain some control over how events will unfold.

As a leader, if you want to encourage your people to come forward when their projects are off course, it’s important to build trust. Then they become willing to mention problems earlier. This helps you to get the solved more quickly and get your projects back on track. People won’t come forward when there is a problem if they are worried about being blamed for the issue. If you think this might be the case in your organization, here’s a self-observation exercise that can tip the balance: simply notice how often you or your colleagues blame your people. As you become aware of this pattern, you can take action against it. This helps to foster a climate of trust.

What are some creative ways you or your people have used to raise problems in projects?

← Four Keys to Unlocking Motivation
How much initiative do you want? →